With Precautions, Golf Is Back. So Are Scoring Squabbles. 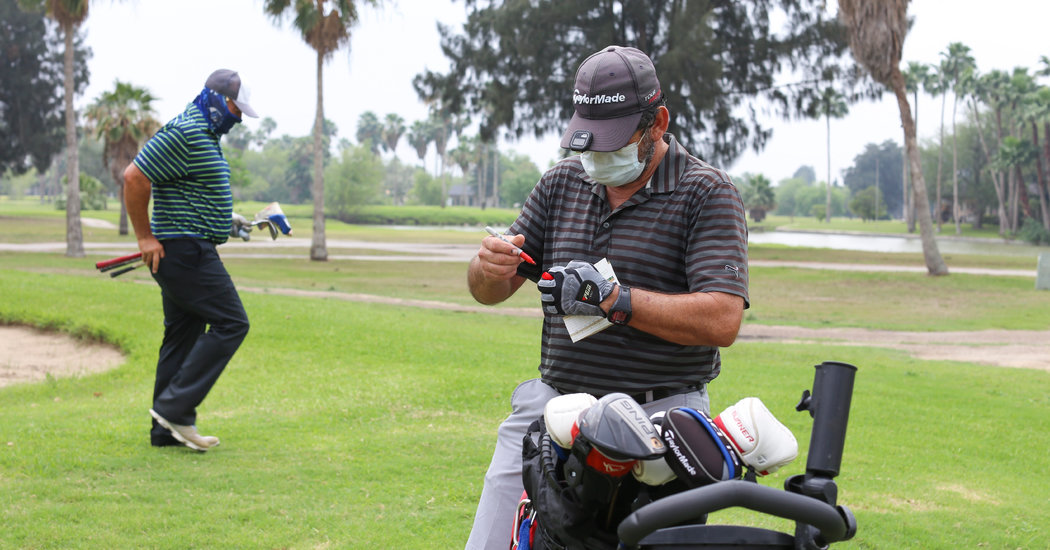 The culture of golf is swathed in a code of honor, with players compelled to call penalties on themselves. Golf during a pandemic, however, has introduced quirks to test the game’s noble protocols.

New safety regulations, adopted by golf courses to adhere to coronavirus guidelines, have altered certain game fundamentals and left some golfers quibbling over artificially low scores — which can in turn upend the hierarchy, and gambling outcomes, of a regular golfing foursome. Even the hole in one, golf’s holy grail, is prompting disputes over what constitutes a holed tee shot.

“There’s definitely been a little change in attitudes,” Howie Friday, the head golf professional at the Stanley Golf Course in New Britain, Conn., said with a chuckle last week. In April, Friday had grown accustomed to scores of golfers thanking him for the opportunity to play.

“A month ago, it was nurses, doctors and golf pros and we couldn’t do anything wrong,” he said. “Not so much anymore — back to normal.”

The principal source of consternation, a concern shared mostly by serious not casual golfers, is new health guidelines that have affected the golf hole itself. In an effort to reduce high-touch surfaces from golfers reaching into holes to retrieve their balls or removing the flagstick, course operators have tried various solutions, including raising the white liner cup, which is normally inserted in the hole, to about two inches above the green surface. An approaching ball bounces off the cup liner instead of falling into the hole.

The United States Golf Association, a national governing body, issued a temporary rule amendment in March that qualified such a situation as a holed shot — with caveats (more on that later).

Other golf courses have instead inserted into the hole a small piece of foam, similar to noodle-shaped flotation devices used in swimming pools. It allows the ball to descend into the hole, but only slightly, so a player can easily retrieve it without touching anything else.

Golfers, however, have universally found that aiming at the raised hole liner is easier than putting in normal conditions, in part because sometimes the ball barely skims its edge. The same shot, without the modification, would likely lip out or scoot past the hole. Golfers have also appeared to putt more confidently, knowing that an overly aggressive putt would just bang into the cup liner and still be counted as a holed shot.

The pool-noodle option has its complexities, too, since some well-struck putts seem to descend into the hole only to rebound and keep going.

“Every day, we have that question over and over,” Friday said. “Was this putt in or was it out?”

Since many golfers like to wager a few dollars, or much more, on matches, deciding the outcome of a putt or several putts by four players across 18 holes can lead to squabbles with financial implications.

Dominic Namnath, who routinely plays with a group of 12 golfers at the Santa Barbara Golf Club in California, said such arguments are settled with common sense.

But George Young, the longtime owner of the Bluffton Golf Club in Ohio, said golfers there have suspended their big money golf games for now.

“I don’t want to gamble a lot if someone doesn’t have to worry about the break of a putt and can just ram it in there and then say, ‘Well, I hit the hole,’” Young, a P.G.A. golf professional for 47 years, said. “That’s a big advantage.”

Counting those putts as holed has unquestionably lowered the scores of thousands of golfers in the past few months, according to dozens of course operators and golfers interviewed last week. Lower scores might seem like a good thing, but in golf, there is always a consequence. When recent scores are recorded to calculate a golfer’s handicap, the approximation of a golfer’s average score over par, the handicap number will drop, which could give a false impression of the golfer’s ability.

But that can only happen if a golfer enters those recent, lower scores. This spring, many golfers, cognizant or disapproving of the changed hole conditions, are declining to enter their scores. Their handicaps have not dropped. Golfers are expected to record virtually every round played to keep competitions, or regular foursome matches, fair. Golfers who do not post good scores are called “sandbaggers,” which sounds nicer than “cheater” but carries much the same connotation.

“I was a 16 handicap a year ago, now I’m down to a nine,” said Wes Campbell, who plays four to five matches weekly at the Riverside Golf Course in Fresno, Calif. “When your number is going down and you’re playing for a couple dollars and you know other people aren’t posting scores, there are discussions on the first tee.

“The sandbag thing is thrown in there.”

Meanwhile, somewhat easier scoring conditions are viewed as an attraction to casual golfers, who make up most players and led to a significant surge in golf participation last month. Tom Bugbee, the chief operating officer of CourseCo, a golf management company with 38 golf facilities in six states, said his firm is weighing ways to continue using modified holes at various times even after coronavirus restrictions are lifted.

Finally, there is the debate over holes in one, which are a powerful concept in a vexing game since they are moments of unsurpassable perfection. The argument about holes in one goes like this: A golfer hits a screaming line drive for a tee shot at a short par 3 hole and after the ball bounces once on the green, it slams into the side of a raised cup liner at high speed.

Common sense might say such a shot would never have fallen into a traditional hole — or remained there. Which is more or less what U.S.G.A. officials have tried to advise golfers who have regularly phoned its New Jersey headquarters with questions familiar to the times: Does that count as in or out? Did I make a hole in one?

“It’s not holed,” Craig Winter, a senior director of rules and amateur status at the U.S.G.A., said when asked about the example of a shot rocketing into a raised hole liner. “I don’t think any golfer would think that.”

Becky Dengler, a golf pro at the Ed Oliver Golf Club in Wilmington, Del., hit a tee shot that may have glanced off a raised hole liner recently while playing with three other women. The group paused for a moment to assess what they had seen. Was it a hole in one?

“Then we kind of laughed it off,” Dengler said. “You don’t take advantage of the situation.”

Winter and his colleagues nonetheless composed a meticulous F.A.Q. document for the organization’s website to assist golfers. The document includes concepts like the “most likely score” on a hole, which sometimes comes down to assessing whether a shot had a better than 50 percent chance of going in.

That leaves room for interpretation, though. Not to mention exceptions. Connor Huck, the office manager at the National Hole-In-One Registry in Charlotte, N.C., one of several hole-in-one registries, said some people who have recently reported holes in one have acknowledged that they were playing under nontraditional conditions.

The registry sells hole-in-one trophies and people have been embossing theirs with custom plates that read, “Covid-19,” or “during pandemic.”

“They put little asterisks on the trophy,” Huck said.