Mickey Wright, One of the Greatest Players in Women’s Golf, Dies at 85 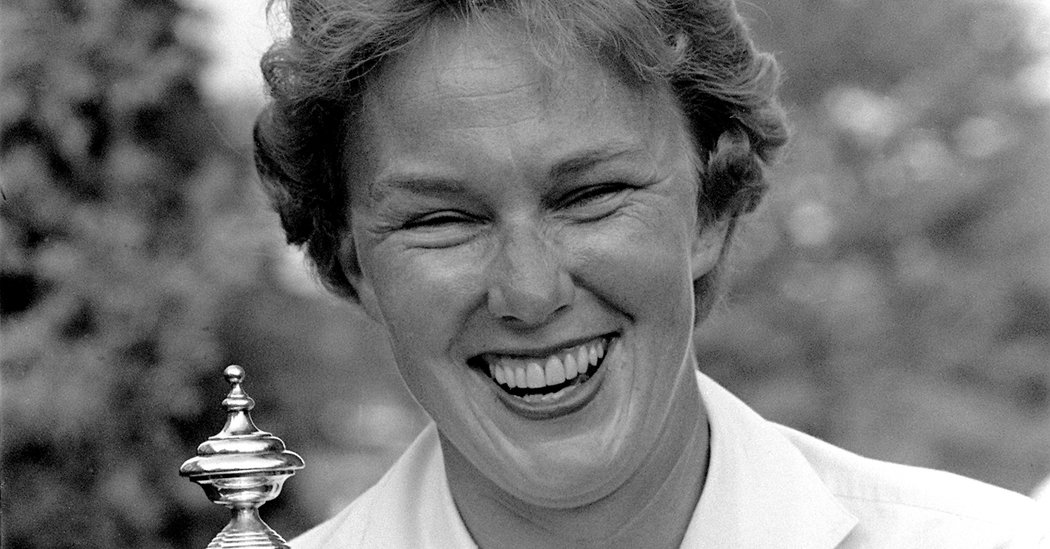 Mickey Wright, who won 82 L.P.G.A. tournaments, 13 of them majors, and was perhaps the finest player in the history of women’s golf, died on Monday in Florida. She was 85.

The cause was a heart attack, her lawyer, Sonia Pawluc, told The Associated Press. Wright had been hospitalized for the last few weeks after being injured in a fall.

A long hitter known for her compact and fluid swing, Wright dominated the Ladies Professional Golf Association tour in the late 1950s and much of the 1960s. She was eclipsed in career victories only by Kathy Whitworth’s 88 and in major-tournament victories only by Patty Berg’s 15.

Wright won both the United States Women’s Open and the L.P.G.A. Championship four times, and she captured the Western Open three times and the Titleholders Championship twice when they were major events.

Wright’s three women’s major victories in a single year (she won the United States Women’s Open, the L.P.G.A. Championship and the Titleholders in 1961) have been equaled only by Babe Zaharias (1950), Pat Bradley (1986) and Inbee Park (2013).

In December 1999, a six-member panel assembled by The A.P. voted Wright the top women’s golfer of the 20th century, ahead of Zaharias and Whitworth.

Ben Hogan was often quoted as saying that Wright “had the finest golf swing I ever saw.”

“She was the best I’ve ever seen, man or woman,” Whitworth said in an interview for ESPN in 2015. “I’ve had the privilege of playing with Sam Snead and Jack Nicklaus and Arnold Palmer and all of them. And some of our ladies had wonderful golf swings. But nobody hit it like Mickey, just nobody.”

Wright spoke of a competitive fire that complemented that form.

“The great winners in golf — Hogan, Nicklaus, Jones, you might have to think about Tiger Woods — they were all great swingers, but their inner drive was off the charts, too,” she told Sports Illustrated in 2000. Asked if she would include herself in that list, she replied, “Yes, I would.”

“She sort of revolutionized golf for us because she was so good and her swing was so perfect,” Betsy Rawls, who won eight majors, told The A.P. in 2006. “Even though we were competitors, she was a joy to watch.”

Wright described her swing in the 1962 (and reprinted) instructional “Play Golf the Wright Way.”

“I could hit it so well,” she told The New York Times in a 2012 telephone interview. “I used to say the second-greatest feeling in the world was a high 2-iron to a well-trapped green.”

Asked about the greatest feeling, she replied: “Winning.”

Mary Kathryn Wright was born on Feb. 14, 1935, in San Diego and was introduced to golf by her father, Arthur, a lawyer and a weekend player.

By age 14, immersed in golf lessons, she had begun developing her swing, keeping her wrist cocked as long as possible as she addressed the ball and staying away from an emphasis on arm motion, something that most women of the era used, resulting in relatively short drives and iron play.

“I swung the club,” she told ESPN. “That’s it. The key word is swing, not turn. Not ground your feet like they were in cement so your body doesn’t move. That’s not a swing to me.”

She had an imposing physique even in her teens — she was 5 feet 9 and 150 pounds in her prime — and, as she told Time magazine in 1963: “The kids at school called me Moose. I had a terrible inferiority complex. I needed something to show my prowess. Golf was it.”

Wright won the U.S. Girls’ Junior Championship at age 17. She attended Stanford University for one year, majoring in psychology, and flourished in amateur events before turning pro late in 1954, having been tutored by the teaching professional Harry Pressler. She won the Open and the L.P.G.A. Championship in 1958 and became the No. 1 figure in the women’s game.

Except for a brief retirement in the mid-1960s, she played regularly on the tour until 1969. She captured her last tour victory in 1973.

“I don’t hide out, put on sunglasses and pull a cap down when I go out or anything like that,” she told Golf World in 2000. “I just like life simple.”

When the United States Golf Association Museum in Far Hills, N.J., held a private preview in May 2012 unveiling its Mickey Wright Room to display some 200 of her artifacts, the first time it had honored a women’s golfer with a gallery, she did not attend, citing burdens of traveling from her home, though she sent a note of appreciation.

But she took a particular interest in the careers of the youngest female golfers on the national scene and corresponded with Lucy Li, a Californian, in the wake of her qualifying for the United States Women’s Open in 2014 at the record age of 11.

Information on survivors was not immediately available.

When Wright played in the L.P.G.A. Sprint Senior Challenge in Daytona Beach, Fla., in 1994, finishing second and winning $30,000 — her largest paycheck ever — some 100 competitors who had completed their rounds followed her around the course.

Later that year, she was the honoree of Jack Nicklaus’s Memorial Tournament in Columbus, Ohio, and she reflected on the years when the L.P.G.A. was a fledgling endeavor.

“We didn’t play golf for much money in the 1950s and 60s but that wasn’t important,” The Columbus Dispatch quoted her as saying. “We laid out the courses, set the pins, made the pairings, did the statistics and clinics and still managed to play a little golf.”