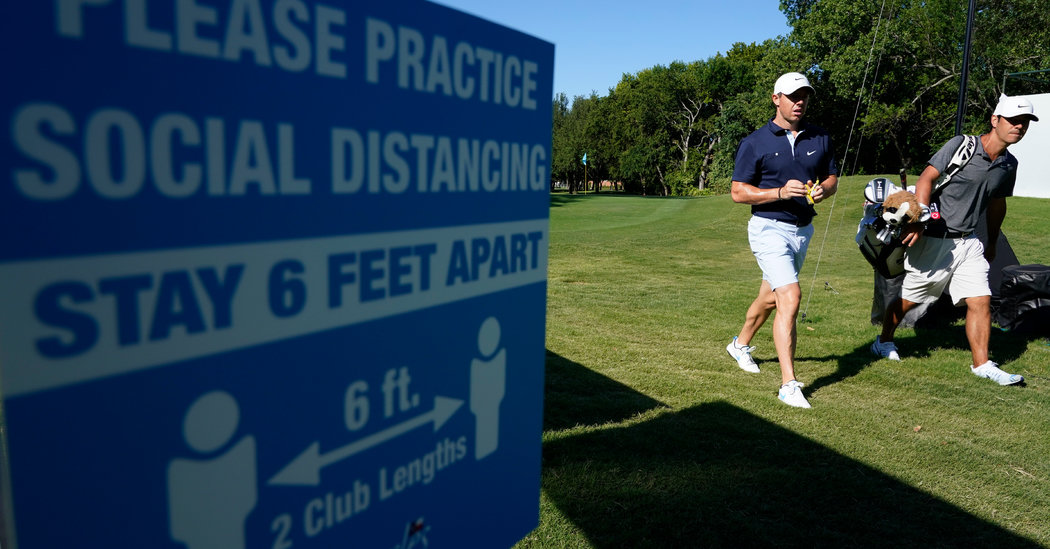 The PGA Tour returns from a 90-day layoff on Thursday with a tournament in Fort Worth that will be contested without spectators and with one new golfing ritual: Players are directed to sanitize their hands after every hole while their caddies wipe down golf bags with disinfectant.

But of the dozens of safety procedures enacted for professional golf’s return, none has vexed the players more so far than the coronavirus testing they have been required to undergo upon arriving in Texas.

“Hurt more than I thought it would, I’m not going to lie,” Jon Rahm, the tour’s No. 2- ranked player, said on Tuesday, hours after he tested negative for the coronavirus.

And when Jordan Spieth, the three-time major championship winner, was asked what was the most uncomfortable part of adapting to golf’s new competitive environment, he batted away suggestions that it might be the spectator-free atmosphere or not being able to high-five someone after a birdie putt.

“I think the swab test was probably the most uncomfortable,” Spieth said, referring to the long swab that must be inserted deep into the nasal cavity. “There was nothing comfortable about it.”

While nothing may be as directly off-putting as the virus swab test, there are likely to be a host of uncommon and anomalous situations during the four days at the Charles Schwab Challenge at the venerable Colonial Country Club.

Scores of players rarely touched their clubs for two months after the PGA Tour suspended its schedule on March 13 because of the pandemic. Golf may be leisurely to recreational players, but for pros the pause was viewed as an unexpected vacation from taut competition and the grind of lengthy practice days.

In the last several weeks, players have picked up their clubs again. But friendly matches with peers on a comfy home course, or formless range sessions, are not the usual preparation for the stress of a PGA Tour event.

“It’s almost impossible to simulate being out there on tour,” Dustin Johnson, the No. 5-ranked golfer, said. “It’s going to take a little time to adjust. The competition rust is a lot different when you haven’t played.”

Rahm said he took seven weeks away from the game, and when he decided to play again his first goal was to, “not shank the first seven balls I hit.” With that experience in mind, and with a chuckle, Rahm predicted “a variety of scores” from his fellow competitors this week.

The long layoff has unwittingly led to what is probably the strongest field in the recent history of the event at Colonial, which dates to 1946. The world’s top five ranked golfers, and 16 of the top 20, will be teeing off on Thursday, although that group does not include the 11th-ranked Tiger Woods.

Woods, who has not played on the tour since mid-February at the Genesis Invitational when he finished last among golfers who made the cut, has only played the Colonial tournament once, in 1997, and he typically does not play any of the other tour events scheduled in the next four weeks. Based on his usual schedule of preferred events, Woods would not make his return until mid-July to play in the Memorial Tournament in Dublin, Ohio, hosted by Jack Nicklaus.

But with the 2020 golf schedule upended and revised — the United States Open will be in September and the Masters in November — it is reasonable to expect Woods to break with tradition and play relatively soon, perhaps in next week’s RBC Heritage Classic at Hilton Head, S.C. or at the Travelers Championship outside Hartford, Conn., from June 25 to 28.

Besides Woods, there are other prominent golfers missing from this week’s field, but most are non-Americans who did not make the trip to Texas because of governmental travel guidelines requiring a 14-day quarantine. That group includes Tommy Fleetwood and Lee Westwood of England, Francesco Molinari of Italy and Adam Scott of Australia. Each is ranked in the top 31on the tour.

This weekend’s tournament will be reflective of recent events besides the pandemic. Tour officials plan to honor George Floyd, the 46-year-old black man killed in police custody in Minnesota last month, and the racial justice movement by keeping open the 8:46 a.m. tee time Thursday. Players around the golf course will pause for a minute of silence. The tee time represents the 8 minutes and 46 seconds that former Minneapolis police officer Derek Chauvin knelt on Floyd’s neck.

“Especially being one of the first sports back, it’s important to set the tone going forward for other sports — for just people in general,” Koepka said. He added: “There needs to be change, and I want to be part of the solution.”

The tournament is being contested without fans, which the golfers have readily conceded will be the strangest part of their return to competition. Rahm wondered what players will hear if the final act of the tournament is a dramatic 30-foot putt holed to win the title.

The tour, meanwhile, has issued warnings about players and caddies maintaining social distancing protocols. Some players have so far appeared better at keeping the appropriate distance than others. The frequent testing of players, caddies and course volunteers, which includes daily thermal readings, may be playing a role in that phenomenon. Kevin Na, the event’s defending champion, explained “You’ve got to remember that all of us tested negative. I think guys get a little comfortable.”

Na continued: “I think people need to realize that some mistakes will happen. Someone will fist bump.”

Na, however, said he asked tour officials about the potential for the virus spreading.

“The answer I got was we hope it doesn’t happen, and we don’t think it’s going to happen because with all the testing that we’re doing and the precautions we’re taking,” he said. “But if it does, if it starts spreading, then they will reassess and they’ll most likely start having to have to cancel tournaments.”