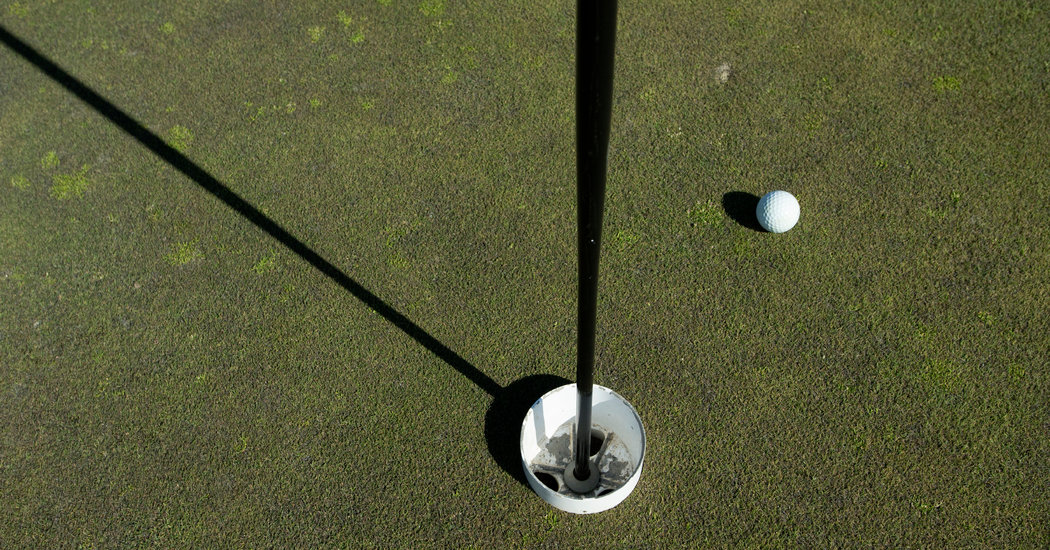 As recently as a week ago, recreational golfers flocked to the fairways of public and private golf courses as a respite from stay-at-home guidelines and lifestyle prohibitions caused by the coronavirus pandemic. Golf, with its wide open spaces, still seemed safe.

In New Jersey’s Somerset County, the five municipal golf courses recorded 6,501 golf rounds in the first 19 days this month, a 300 percent increase over the number of rounds played in all of March last year. A similar surge in play, with players observing social distancing and other limits on close interactions, was happening all over the United States.

“The turnout almost overwhelmed us,” said Matt Kammeyer, the director of golf for Salt Lake City’s seven courses. “Just a lot of happy, grateful people enjoying a round.”

This week, it increasingly appears that golf’s reprieve was short-lived. With stricter measures on public gatherings, our games, like everything else, live in realms of past and present.

Over the weekend, dozens of cities and counties overseeing hundreds of golf facilities closed or indefinitely suspended play on their courses, usually at the direction of government agencies. That included the courses in Somerset County and in Salt Lake City and at some Trump resort properties. Scores of courses remain open, but every day the roll call of shuttered golf complexes mushrooms.

“A few guys I play with are talking about going to Pennsylvania because some of their courses are open,” Tom Avers, who plays about 100 rounds annually at the Somerset courses in New Jersey, said Monday morning. “But I think they’ll probably close down soon, too.”

Kari Phenix, the head pro at the municipally owned Fort Myers Country Club in Fort Myers, Fla., said she was still seeing about 250 golfers at her course daily, but she wasn’t sure how much longer that would last.

Fort Myers is home to the spring training complexes of the Boston Red Sox and the Minnesota Twins and is a popular winter destination for Canadians. But in a span of two weeks, the baseball fans and tourists have left. Nearby beaches, tennis courts and community pools have closed. Social gatherings at a voluminous number of retirement centers have been canceled. But thousands of retirees in the Fort Myers area have remained and been playing golf.

“It’s mostly males, and a lot of them are widowed and don’t have anything else to do,” Phenix said. “What are they supposed to do? It’s walk, ride a bike and play golf. They’re very thankful we’re open — everyone stops to say thanks.”

For a while last week, the pandemic had spurred a few notable changes in the recreational golf world that would have been unimaginable a month ago. For example, golfers seemed less prone to grumpily bemoan their poor shots, cruel bogeys and heartless bounces.

“Complaints are way down,” Bob Ransone, the deputy director of the Somerset park commission’s golf division, said Saturday before his operations were closed. “People are just too appreciative to be out in a beautiful environment.”

Walking the course instead of driving a golf cart had become a new norm, something many in golf have advocated — to no avail — for decades because of the health benefits.

And the customarily rigid United States Golf Association, warden of golf’s laborious rule book, even went out of its way last week to make the game, and its rules, easier.

To minimize contact between golfers, most courses had closed clubhouses and snack bars, removed bunker rakes and ball washers, gone caddie-less and encouraged the use of online payment options. But one unsanitary condition of play remained: After putting out, golfers had to stick their hands into golf holes to retrieve their ball, after dozens of golfers had done so before them.

Solutions proposed by golf superintendents soon abounded, including foam hole inserts that kept the ball near the top of the hole. Many golf courses even began raising the white liner cup, which is normally inserted into a hole, to about two inches above the ground. That way, an approaching ball could not fall into the hole but would instead bounce off the cup.

On Friday, the U.S.G.A. temporarily amended its rules to say that a ball bouncing off a cup in such a manner would count as a sunk putt for official scorekeeping.

Golf without close putts that pitilessly lip out? For a week, golfers had a new reason to smile.

It is not clear when the majority of closed golf courses nationwide will reopen. Nor is it clear how long the courses that are currently open will remain so in many disparate regions of the country. Private golf clubs, where most clubhouses are already closed, may or may not discourage play, but it’s unlikely that many will be willing to stop their members from walking onto the course with a golf bag. Golfers are also sneaking onto some public courses.

“I drove by a closed public course yesterday and saw people playing golf on it,” Avers, the avid golfer who lives in Morris Plains, N.J., said. “It’s probably safer than going to the grocery store.”

Dr. Kryssie Woods, an epidemiologist and director of infection prevention at Mount Sinai West, a medical center in Manhattan, wrote in an email on Sunday that golfers should heed the advice of government leaders and medical professionals by staying home.

“The more we embrace the advice to quarantine ourselves now, the sooner everyone will be able to resume normal life — including getting back on the golf course,” Woods wrote.

Avers said that he accepted and understood the warnings and that he would heed them.

“I guess I’ll do more landscaping and read a lot of books,” he said. “It’s going to be pretty boring.”

A week ago, the sun was out and Avers was on a golf course. Monday brought heavy rain and even snow to parts of the northeastern United States.