Doug Sanders, ‘Peacock of the Fairways,’ Dies at 86 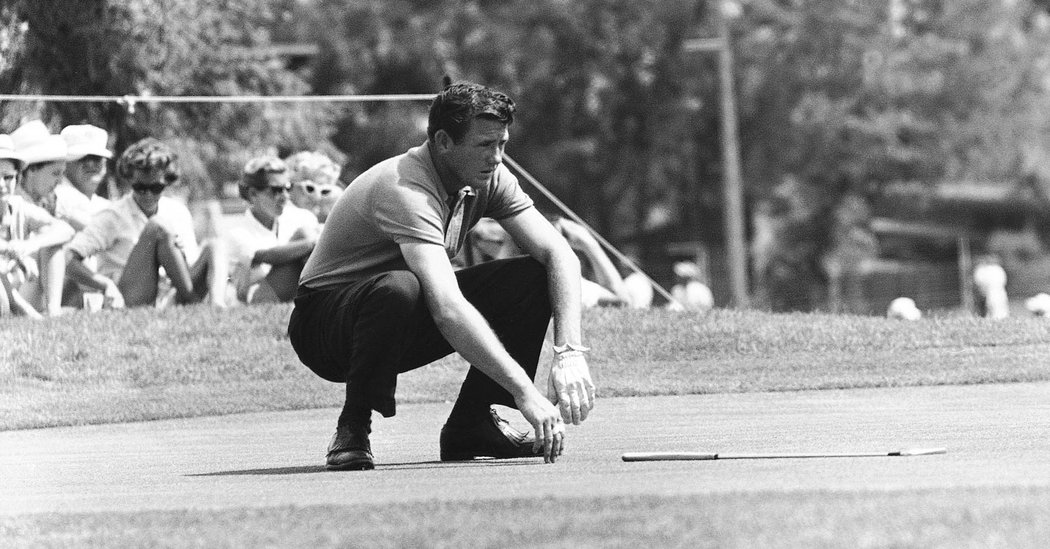 Doug Sanders, who lit up the otherwise staid golf circuit of his time with his colorful attire and became a fan favorite while winning 20 PGA Tour events, only to fall just short of capturing a major tournament, died on Sunday in Houston. He was 86.

The PGA Tour confirmed his death.

Sanders was trim and handsome, he loved to chat with the galleries and he delighted fans with trick shots during warm-ups. He grew up in rural Georgia during the Depression, clad in ragged garments, but became known as the “peacock of the fairways” for his stylish and bright-hued clothing.

Developing an outstanding short game with his pitch-and-run shots and low blasts with his irons, Sanders was often on the brink of stardom. But a hot opponent or a flubbed shot would do him in.

Most famously, he missed a three-foot putt for the 1970 British Open championship, then lost to Jack Nicklaus by one shot in an 18-hole playoff. He had previously tied for second at the British and United States Opens and at the P.G.A. Championship.

Sanders had an unorthodox stiff-legged stance with an abbreviated backswing that he honed as a youngster to keep his shots under control, because time was precious. While caddying on a nine-hole course, he would sneak onto the fairways with his brother James when no one was around in order to avoid the fees, and he needed to get his round in briskly.

“The fairways were only so wide and we had to keep the ball in the middle where we could find it and run in case somebody spotted us on the course,” he once told Sports Illustrated.

Sanders eventually wielded a vigorous follow-through and he generated power through developing strength in his forearms, although he never pursued formal exercising.

He received an athletic scholarship to play golf for the University of Florida, and in 1956 he became the first amateur to win the Canadian Open. He turned pro in 1957, got his first tour victory a year later, at the Western Open, and tied for second place at the P.G.A. Championship in 1959.

He tied for second at the United States Open in 1961 and at the British Open in 1966, when he placed in the top 10 at all four majors and won the Bob Hope Desert Classic, the Greater Greensboro Classic and the Jacksonville Open.

Sanders was on the point of finally capturing a major when he teed up at the 18th hole in the final round of the 1970 British Open on a gusty day at the Old Course at St. Andrews in Scotland.

Needing a par 4 on the 350-yard hole to win, he drove the ball about 75 yards short of the cup, then hit a sand wedge that left him on the green, about 35 feet away. His downhill putt stopped about three feet from the hole. But he missed the par putt for the championship.

“On my second putt I thought there was a pebble in front of me,” he told The Associated Press afterward. “That’s why I stopped midway and went to take a look. It turned out to be a bit of tough grass. Maybe that exercise threw me and made me miss the short one.”

The next day, Nicklaus beat him in their playoff.

Sanders loved nightlife, he hosted show-business celebrities at his Houston home and he owned dozens of slacks, shoes and sweaters. Pharmacists sometimes emptied prescription capsules whose colors attracted him, and as he told Golf Digest, “I’d stick the top half of an empty yellow capsule onto the bottom half of a blue one, then send it to the factory where my shirts and slacks could be colored the same way.”

“I always wanted to wear the finest,” he told The Christian Science Monitor, “because my clothes set the stage for everything I did.”

George Douglas Sanders was born on July 24, 1933, in Cedartown, Ga., where his father was a farmer and truck driver. George picked cotton for a nickel a day at age 7.

“There wasn’t enough to eat,” he recalled. “No doctors, lice in our hair, ratty hand-me-down clothes.”

Golf enabled him to escape poverty, and his triumph at a Chamber of Commerce national junior championship led to his golf scholarship at the University of Florida.

Sanders’s collapse at the last hole of the 1970 British Open was the beginning of a decline. He won only one PGA Tour event after that, the 1972 Kemper Open. He joined the Senior Tour (now the Champions Tour) in 1983 and got his only victory on it when he captured the World Seniors Invitational that year.

Information on survivors was not immediately available.

Sanders’s lighthearted approach endeared him to fans, but he felt that some of his fellow competitors were none too happy about it.

“I figure the gallery gets as nervous as we do sometimes, and we ought to try to help them enjoy themselves,” he once told Sports Illustrated. “Some guys just don’t have it in them to get laughs. But they shouldn’t resent the rest of us putting on a good show. That’s what we’re out there for, isn’t it?”