After Two Rounds, Jordan Spieth Shows No Signs of Rust 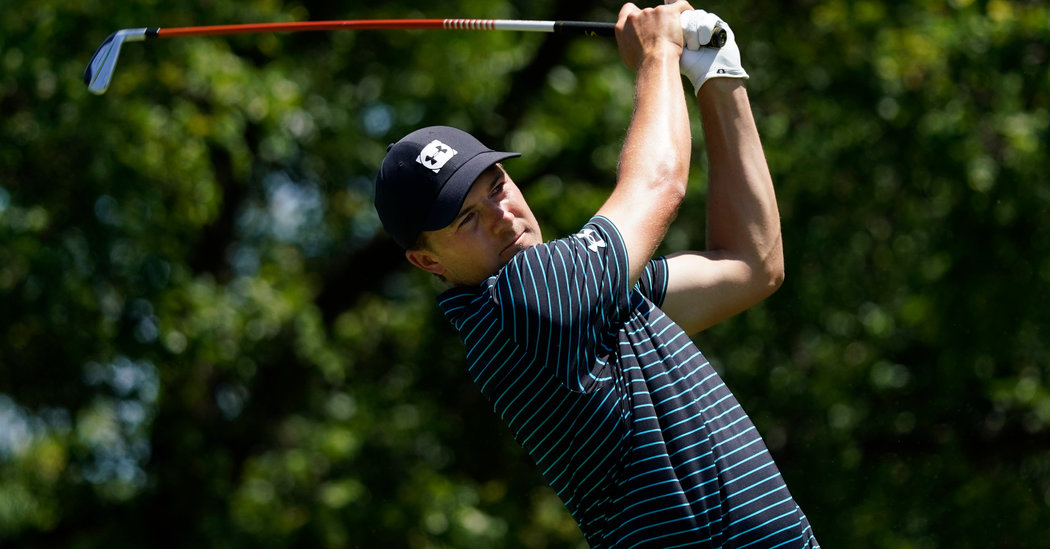 FORT WORTH — Maybe the PGA Tour’s three-month layoff was a blessing in disguise for Jordan Spieth.

It has been almost three years since he last won a PGA Tour event and almost as long since he’s held or shared the lead after 36 holes, but Spieth walked off the Colonial Country Club course on Friday tied for first at 10-under par. His score held to leave him tied in second place at day’s end, behind Harold Varner III.

Some players were rusty after the layoff. The strongest field in Colonial history took a hit as those who missed the cut included the No. 2 world golfer, Jon Rahm; the fifth-ranked Dustin Johnson; the 17th-ranked Matt Kuchar; the 31st-ranked Kevin Na, the defending champion; and the two-time Colonial winner Phil Mickelson.

Once considered the sport’s “next big thing,” Spieth, 26, posted two rounds of five-under-par 65 to enter the weekend at the Charles Schwab Challenge in contention on one of his favorite courses, which is just a 30-minute drive from his Dallas home.

“I love this place,” Spieth said. “It’s just a golf course where it forces you to hit to certain areas and play from there, and each pin location has kind of a place you can miss and a place you can’t. So, it’s just learning it and missing in the correct spots when you’re out of position.”

Spieth, who captured two major titles in 2015 and reached No. 1 in the world, had spiraled downward since, primarily because of frustrations from failing to regain his form, to his current ranking of 56th. But his knowledge of the local course put him in position for this grand return this weekend, as he has compensated for ball striking mistakes with creative scrambling around the greens. Starting on the back nine on Friday, he was six under through 11 holes, but then four-putted for double bogey on No. 3 and bogeyed No. 4.

The four-putt on No. 3 could have sunk Spieth’s resurrection before anyone took notice. But he chalked up the bungled hole to nerves from the three-month layoff.

“I did a really good job of staying very neutral where I’d been kind of getting really negative or down on myself for a little while in the past now,” Spieth said. “I felt that I gave myself some grace to say, look, I haven’t really been practicing a ton of those kind of short-range putts.”

“There wasn’t a huge swing of emotions,” he added. “I stayed calm.”

Spieth missed a par putt on the fourth green, but rebounded the rest of the way, birdying the fifth and sixth holes and then managing to pull off two spectacular par saves. After his drive nestled behind a big oak on the seventh hole, Spieth carved his punch shot around the tree, chipped to five feet and made the putt.

On the par-3 eighth hole, his ball sailed to the right of the green into a wooded area along the bank of the Trinity River. From that bare spot, just reaching the putting surface would be a call for celebration.

But Spieth threaded a low pitch to avoid trees into the bank of the green, narrowly missing the bunker left. His ball came to rest 4 feet past the hole. He smiled sheepishly as he walked up the hill to the green to join his grinning playing partners, Justin Thomas and Rickie Fowler. Since there were no fans, Fowler provided a soft clap for his friend.

Spieth said he told his caddie, Michael Greller, that “it was a top-10 up-and-down I’ve ever had, but it may have been a top five on the PGA Tour for me.

“I thought if I hit the green, it would have been phenomenal. After I hit the shot, I just looked and Rickie and Justin were both staring at me, making signs with their backs to the cameras at me like it was pretty ridiculous.”

During the three-month layoff because of the coronavirus pandemic, Spieth had ample time to work on his swing without the usual pressures and distractions of tournament golf. He admitted that overthinking had been his biggest nemesis over the last two years and said he relished using the tour’s hiatus to free his mind of swing mechanics.

“I tried to approach it as an off-season, knowing that we’re going to get pretty busy this fall all the way through really the next fall,” Spieth said. “I tried to take some time off from grinding the first month or so, have some fun, and then as things started to open back up, was able to come back and work on different shots.”

Regardless of the state of his game, Spieth usually finds a way to contend at Colonial. Spieth’s record at “Hogan’s Alley” features a victory in 2016 and two ties for second among five top-eight finishes. He has finished outside the top 10 only twice in seven starts — a tie for 14th in 2014 and a tie for 32nd in 2018. His scoring average of 67.79 is the best in tournament history.

Spieth was in contention last year, entering the final round two shots behind Na. But Spieth shot 72. He hopes to find himself in a similar scenario on Sunday. After all, that’s what he has been training to do for the last three months.